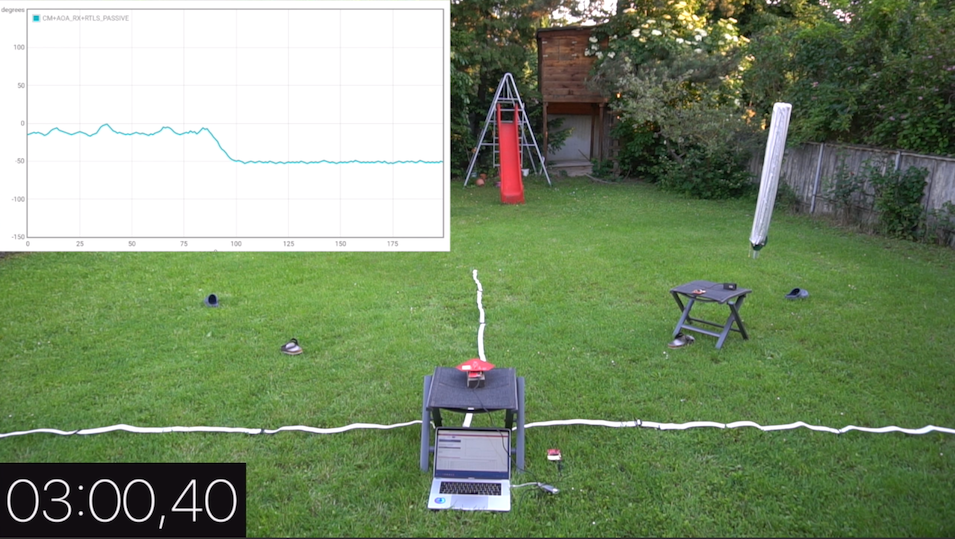 For my third semester at UAS St. Pölten I had to participate in a research project for the (link: https://digitech.fhstp.ac.at/en text: DigiTech research group), and I did so for the Evaluation of the **Bluetooth Angel Of Arrival **Development Boards by Texas Instruments. Bluetooth Angle of Arrival is a new technology were the receiver of a Bluetooth connection is able to determine the physical angle from which the sent packet is coming. This makes it possible to locate a device in a room. To locate it perfectly you will need two receivers capable of determining the angle, so you can basically draw a cross and locate a device exactly. The boards I used were the SimpleLink C2640 R2 SDK dev-boards from Texas Instruments. For the angle determination a special shield is needed that has an array of six antennas and a chip that switches between them. The principle to determine the location works as follows: First the connection is initialized and the slave device (the one we want to track) is advised to send special AoA packets. These packets consist of a header with information and a string of ones at the end. A string of ones means a continuous signal, that can be used by the receiver to determine the angle, this works by quickly switching through the array of antennas and measuring the phase difference between them. This way the receiver can calculate where the packet came from. (gallery: 2d066db7-8794-46c5-9eb1-27739a42726a.jpg aoa-test.png screenshot-2019-06-14-at-11.24.49.png) So far the theory... In practice I experienced lots of weird issues with TIs Development environment, I used their CodeComposerStudio, which is a modded version of Eclipse IDE. I also needed to use three development boards since at the current state of the SDK the Bluetooth connection can not be handled by the same device that does the antenna switching and calculation. So in the end I had to hook up two development boards up to my laptop to track the third one. After playing with the boards for some time I came to the conclusion that AoA in Bluetooth has potential, but at the current point in time is very easy to get interferences with the reflections coming from walls and other surrounding Objects. In the future it would sure be interesting to test these systems with more receivers, different antennas and other chip sets, eg the one from Nordic Semiconductors, unfortunately there are very few Dev board available yet. Here is a short demo video: (videofile: video.mp4)