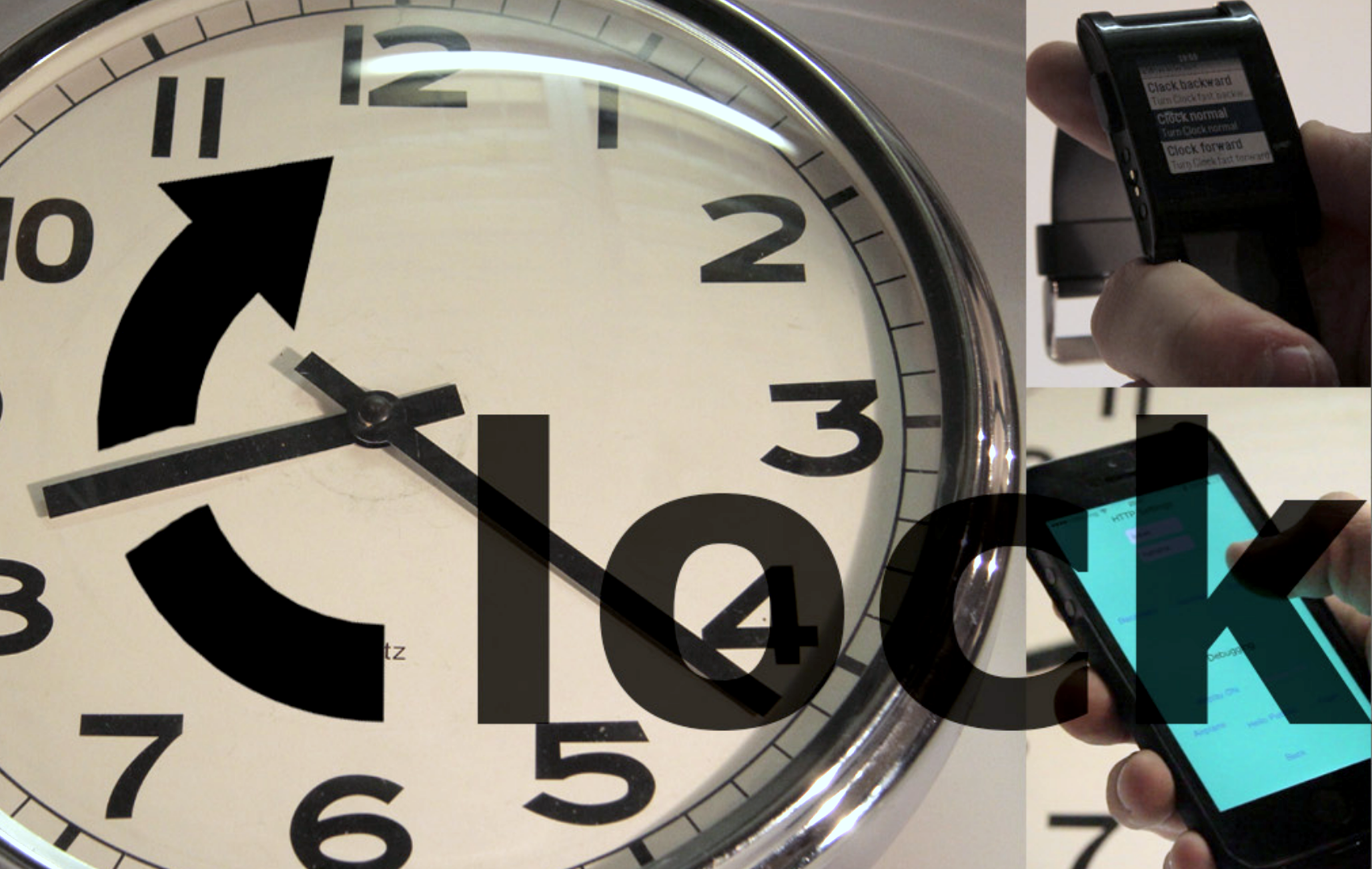 ClockTurn Project was an idea I had when I was nearly sleeping in a very boring lesson at school. Wouldn’t it be cool to turn the time like you want to? So i started to collect ideas. I disassembled a cheap clock and tried to speed it up by sending faster impulses to the coil that turns the magnet in the smallest wheel of the gearing. It worked but I wasn’t able to reverse the clock by changing the polarity.. So I decided to build a little stepper-motor into the gearing. Luckily the teeth of the cheap clockwork fit onto a M5 thread, what made things much easier.

I built a Atmega328 with his minimal surrounding components and the stepper driver on a little board and wired it all up. Then I modified a sticky-tape-roller by building an IR sender into it. So I was able to control the big clock in our class with my sticky-tape-roller. This was quite funny but the sticky-tape-roller wasn’t the best remote. So I used a TV Remote instead.

Around one year later I thought about the project again and started to make improvements: I’ve added a relay to switch something (like a heat wire to pop a balloon or other things) , a led for debug-purposes and a little under-voltage-cut-off circuit to protect the LIPO battery (I already ruined two…).

I also tried to use the Arduino USB host shield with a cheap Bluetooth dongle instead of the IR remote. That worked nicely but only with my laptop and not with my phone. So I searched on and ordered some Bluetooth 4.0 modules to communicate with my iphone but unfortunately the iPhone 4 doesn’t have BT 4.0 so I needed something else.

The final solution is a TPLink WR700N MiniRouter which i flashed with OpenWRT. It lives inside the Clock and is also powered by the clock’s LIPO battery. It runs a Lua script that waits for incoming HTTP post requests (luasocket) and sends signals to a USB serial bridge which is connected to the microcontroller.

So to control the clock you’d have to connect your phone to the WiFi (provided by the router) and then send HTTP POST requests. I added the three commands for the clock to my home automation IOS app and also to It’s companion pebble watch app. So now I can control the clock using my pebble.

I never opened the original clockwork so if I don’t want to use the clock (because that means to replace the lipo everyday) and still don’t annoy the class I put it back in. And my most important “tool” to mount everything inside the clock: Duckt-Tape =D

For carnival at school I was searching for a gag. So i built a small circuit (so called current source) to limit the current from the LIPO and added heat-wire pads from an old toy my father built for me when i was 8 (also a machine to pop balloons filled with confetti). Here are some more photos:

In my first Bachelor semester I had to do a presentation and I choose the clockturn project as my topic.
Since my old home automation app has been renewed, I built an extra app for clockturn (and a new pebble watch face) You can checkout the watch face on my github.

Here are some screenshots: