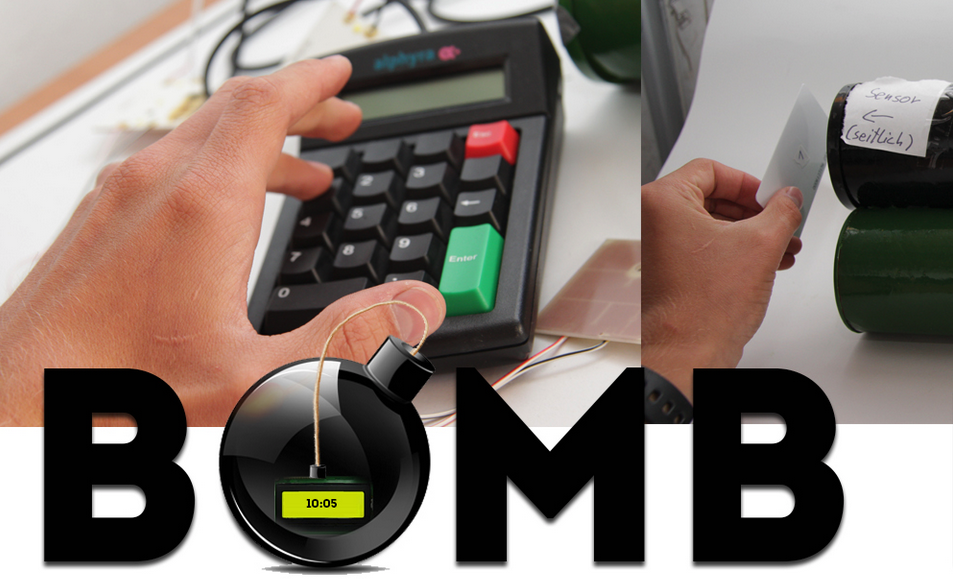 In our Scout group there is a tradition that the eldest of our a certain age group are allowed to prepare a night game before they go to the next age group. This time it was our turn and I had an Idea. Why not use my micro-controller knowledge for this?! Also I always wanted to build Bombs which you have to be disarm by entering the right code ore cutting the right wires like in many spy-films. So I’ve presented the Idea tho the others and they immediately liked it so we started to declare the details and I started to work on the electronics.

There were 5 teams of 3 people each and they had to disarm 3 Bombs.

I’ve started by building the basic housings for the bombs: three Pringles cans glued together to form a a bomb.

Then I fixed the displays in the cans and built a little board with a IIC Portexpander to connect the displays in a simpler, pin-saving way. After that I started to create the boards itself. The PCB of bomb 1 is from my coffee maschine project that is freezed at the moment, the second bombs board is from my AAVProject and the third bomb got a new board. I had to add more headers to the existing ones to connect all the stuff. I built the relays for the fan and the light chain and then my father replaced the existing chip inside the pinpad with an ATMega328 to make it easier to use it without any reverse engineering. I programmed an IIC communication for it and connected it to the first bomb. After that I found a simple Library for the 7 Segment Displays which are working using a shift register. After fixing the order of the segments in the code I’ve connected them to the third Bomb. Also I’ve put a port expander on a little piece of board and labeled it “Zündmodule” (ignition module). These were the wires that the teams had to cut to disarm the bomb. The next thing to do was to build some kind of mechanism to catapult the chipcards out of the third bomb so I went for a pretty simple design using a piece of aluminum, some wood and a simple servo motor to release 1 of 2 rubber bands.

Also I had to build the final station which beeps some morse code when activated using the right chipcard. I used a Haribo Container for that that I had laying around, painted it black and put some LEDs and the RFID antenna in it. I’ve used a original Arduino this time. I’ve modified the morse library to work with Arduino’s tone() function.

I’ve also built a simple cut-off circuit to protect the LiPo battery that powers the big 7-seg displays. It keeps a relay closed as long as there are more than 10.3 Volts in the battery, then it switches everything off.
In addition tho that every LiPo got a fuse after I’ve killed 2 Voltage regulators…
We’ve also used many of those knit-lights to mark the stations =D

You can download my modified libraries, the password lib with a backspace() function, the LCD \ IIC library modified for the 20 by 4 displays (they’re using 2 separated display controllers… so I added a boolean value called silliness to use the library with those displays) and the morse lib with tone() here.
If you have any questions feel free to ask in the comments or write me an email.

After 1-2 weeks of work (came home from my holiday job at 6 and worked til 1 in the morning) I finally finished everything and the camp began. Our game was planned for the fourth-last day. 2 days before we started to explore the area behind the camp with our bikes to find the best positions for the stations. We saved the GPS positions on our phones and back at the camp we found a nice workplace, away from the others so that they didn’t got suspicious. We created a map with many random numbered marks and placed some of them on our positions. In the meanwhile the others prepared the Sudokus.

I then started to add the numbers to the code that the bombs display the right next station. Then we printed out the maps and waited for the evening.
The game was ready!

After dinner we went to our bikes and split up: two of us brought out the Sudokus, two brought out the bombs and chip cards and the rest stayed with the others to surprise them with our story.
So they told the others that I got mad and that I’m going to blow up the whole camp and that they would have to stop me.

Everything worked perfectly except for a little bug in the first bomb so they had to call us to find out what the next station was.
Because of that 3 of the 4 groups (there were just 4 because 2 guys had injured toes…)
met and went on together…

But except for that everything worked and It was a lot of fun for us!

The next day I got an invitation to give an interview to the camp’s newspaper and they wrote a little report about our game!

So here again the complete game:

First the teams got a number for the first station, the Sudoku. Every team had their Sudoku in a different place to separate them. The Sudoku contained four marked boxes and the teams had to order the numbers from the boxes from the lowest to the highest.

This was the code. There was also the number of the first bomb station on the sheet with the Sudoku. Every team had a different code so the bomb could greet them =D. When they entered the wrong code the light chain started to flash 20 times and the sentence “WRONG CODE!!!” was blinking on the display, then they could retry. When they entered the right code the bomb told them the next station. There they had to climb under the bridge into the pipe to get their first chip card. There was a chip card for every team and they were marked with light bands to make it a bit easier.

After that they went to the second bomb. This was was easy to disarm by holding the chipcard to the sensor. As a sign that the bomb was off then it turned off it’s fan. At the next station they had to climb up on a tree where they found scissors with a piece of paper saying “Cut the red wire”.

The next station was the most exiting, Bomb 3. They first cut the red wire and then the big displays went on counting down from 90 while the bomb was beeping and the display said “Quick! cut another wire! Which one? Search behind a tree!”. This was quite funny as the whole game took place in the woods. Behind one of the trees I placed a note saying “Blue or Green”, just to make it a bit more difficult =D. But luckily every group cut the blue wire…

If they hadn’t, the bomb would have started another 10 second countdown and one of us would have jumped out of the trees and told them to run while another one of us would have been lighting a firecracker. When the last bomb was disarmed correctly it throw the correct chipcard, or the wrong one If it “exploded”. With this card the had to go to the base station near the camp to receive the final morse code which contained the code of a pin code lock.
First we planned to steal all their bikes and lock them up but this was too much work so we left that part and send them back to their tents afterwards.